SNAPSHOT: Strong Healthcare Consolidation in 2019 – Expect Even Stronger in 2020

Last year ended on a high note with 187 healthcare deals announced or closed in December, making it the most active month of 2019.

The continued proliferation of technologies to improve patient care, the accelerated development of biomedical innovation, and the sustained focus on delivering high-quality, low-cost care through value-based approaches have spurred the investment activity in 2019 with the global transactions closed / announced for 2019 reaching 1,588 through December, a healthy increase from 2018, reflected in the following figures:

Investment activity may moderate after the election, depending on the results and possible changes that a new Congress or administration may bring; However, we still anticipate an increase in transactions and the possibility of closing nearly 2,000 transactions in the healthcare industry in 2020.

Offices and services of physicians (including management of dental offices)

Medical services remained an area of â€‹â€‹great interest to investors in 2019 and are expected to continue at the same pace or faster in 2020. We expect activity in this sector to reach 250 to 300 transactions in 2020. The demand for outpatient services continues to grow. due to changing reimbursement incentives for patients to receive care outside of hospitals, and in the most cost-effective setting needed. 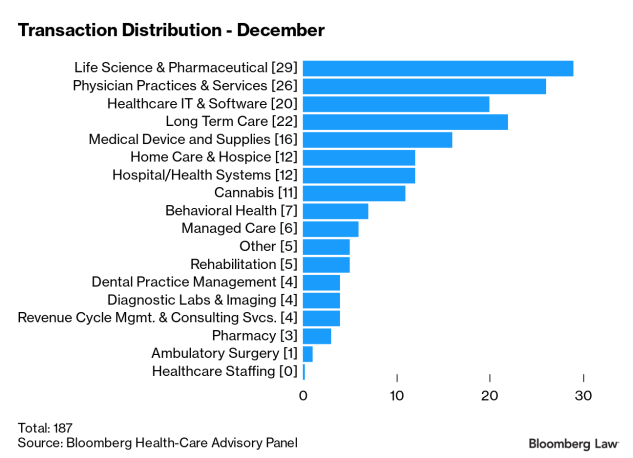 Although medical specialties with one or more ancillary revenue sources (eg outpatient surgery, imaging, laboratory, etc.) â€which have the best opportunity to control the cost of quality care.

2019 has been a strong year for private equity add-ons in the ophthalmology, dental, pain and eye care industries. In ‘newer’ target specialties, such as orthopedics, gastroenterology and urology, there have been a number of new platform investments, as well as platform add-ons launched over the years. last years.

There are also signs that hospitals are coming back into the fray by acquiring physician pools, defensively, as many practices in their catchment areas are pursued by investor platforms, as well as to bolster their growing initiatives to clinical and population health integration.

Although the number of transactions involving the consolidation of hospital and healthcare systems declined in 2019, several significant mergers have taken place. Overall activity has declined because hospitals in large metropolitan areas have already undergone substantial consolidation, and many of the deals closed now (and in 2020) involve either:

All this activity is driven by the evolution of reimbursements, the rapid increase in operating expenses, the need for capital to invest in advanced computer systems (e.g. ambulatory care capabilities, all to effectively face the competition). growing in their markets.

Large organizations clearly have much more capital for these investments, and many of them have already invested hundreds of millions and are looking to achieve economies of scale by bringing the benefits of these investments to a much larger group. important from affiliated establishments.

Long-term care dominated all sectors in 2019 with almost 300 transactions announced or closed, a 40% increase from the previous year. This upward trend is expected to continue into 2020 and beyond, as the baby boomer population ages into their seventies and eighties, driving growing demand for post-acute care providers and facilities. in the â€œcontinuumâ€ of long-term care, ranging from adult daycare. home health and assisted living in rehabilitation and nursing homes.

For example, the Ensign Group, a publicly traded provider of post-acute health care services with regional subsidiaries nationwide, continued its strategy of growing acquisitions with 26 acquisitions in 2019. In addition, the Acquisition activity in the home health sector has also increased significantly, with many transactions involving both public and private investors.

IT and health software

The healthcare IT and software sector continued its sustained pace of transaction flow with more than 200 transactions announced or closed in 2019, also up around 40% compared to 2018.

Health information technology remains an area of â€‹â€‹great interest to investors, as data collection and analysis is one of the critical elements of successful value-based care initiatives. This includes interest in companies with artificial intelligence (AI) technologies (to improve diagnostics, early detection and research studies), mobile apps for connected devices, and enhanced cybersecurity.

In addition, virtual care platforms are increasingly being implemented across the country, and these platforms are expected to become the â€œfirst point of entryâ€ for the majority of clinical interactions due to the convenience and convenience. of patient efficacy.

Continued biomedical innovation has resulted in a significant increase in the number of life sciences and pharmaceutical transactions announced or concluded in 2019 compared to 2018. Despite the growing attention to pharmaceutical pricing, the interest in investing is expected to continue in 2020 given the significant ROI potential for advanced treatments. driven by new innovations in gene therapy, precision (personalized) medicine and new biological drugs.

The size of transactions in this sector continues to be among the highest on record; for example, in December, International Flavors & Fragrances Inc. announced its acquisition of the Nutrition & Biosciences business of DuPont de Nemours Inc. for $ 26.2 billion.

Likewise, interest in medical device companies was strong in 2019, as vendors and payers sought ways to effectively manage costs and improve outcomes for patients with acute and chronic illnesses.

This investment interest is driven by the growing awareness and funding of behavioral health services, to effectively treat autism, depression, anxiety and substance use disorders (especially in light of the national opioid crisis). For these and other reasons, we anticipate that this sector, broadly defined, will be a target for further consolidation in 2020 and beyond.

Medical marijuana is now legal in nearly 40 states, and deals announced or completed in the cannabis industry jumped to nearly 60 last year, with most deals taking place in the second half of the year. This trend of continued growth is expected to strengthen by 2020 and could easily reach the 100 transaction mark.

This column does not necessarily reflect the opinion of the Bureau of National Affairs, Inc. or its owners.

Epstein Becker & Green PC has not commented on any particular transaction or part discussed or listed in this article.