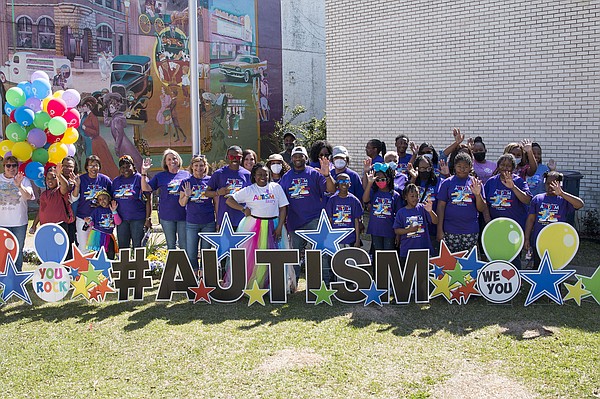 April 2 marked World Autism Awareness Day and a parade was held in downtown Camden to recognize the event.

In 2019, she spoke with the Camden Lions Club and shared her story.

Johnson’s son, Darius, was diagnosed with autism at a young age.

Johnson shared, “I didn’t get it and was like ‘Why me? But then, as this journey progressed, I realized ‘Why not me?'”

She said the hardest thing about the journey isn’t autism, but people’s reactions. Johnson said people would become uncomfortable in restaurants due to her son’s rocking motions. They asked Johnson if Darius was “slow” or “retarded”.

She admitted that for a while her child was non-verbal and was even told by specialists that he would probably never speak.

“I said, ‘Darius, I won’t get off this couch until you tell me what you want,'” she said.

With a sigh, she said, her son said, “I want something to drink.”

She said it brought her insight.

She launched the Walk for Autism from meager beginnings with 20 participants in the first year the event took place. The event now has hundreds of people coming to support it.

Johnson also hosts a banquet honoring the accomplishments of people with autism. She said a staple of the banquet was chicken strips and she asked people to wear “whatever they are comfortable with”.

President Joe Biden marked the day in Washington with an address that said, in part, “We have made significant progress in improving access to opportunity for people with developmental disabilities in recent years. However, many people with autism still experience gaps in employment and income. The COVID-19 pandemic has compounded these inequalities, creating unique challenges and tensions for people with autism and their families.”

In 2021, the Autism Society of America lobbied to have the month renamed Autism Acceptance Month because, according to Autism Society of America President Christopher Banks, “awareness is knowing that someone has autism. Acceptance is when you include (an autistic person) in your activities. Help them grow in that community and develop that sense of connection with others.”