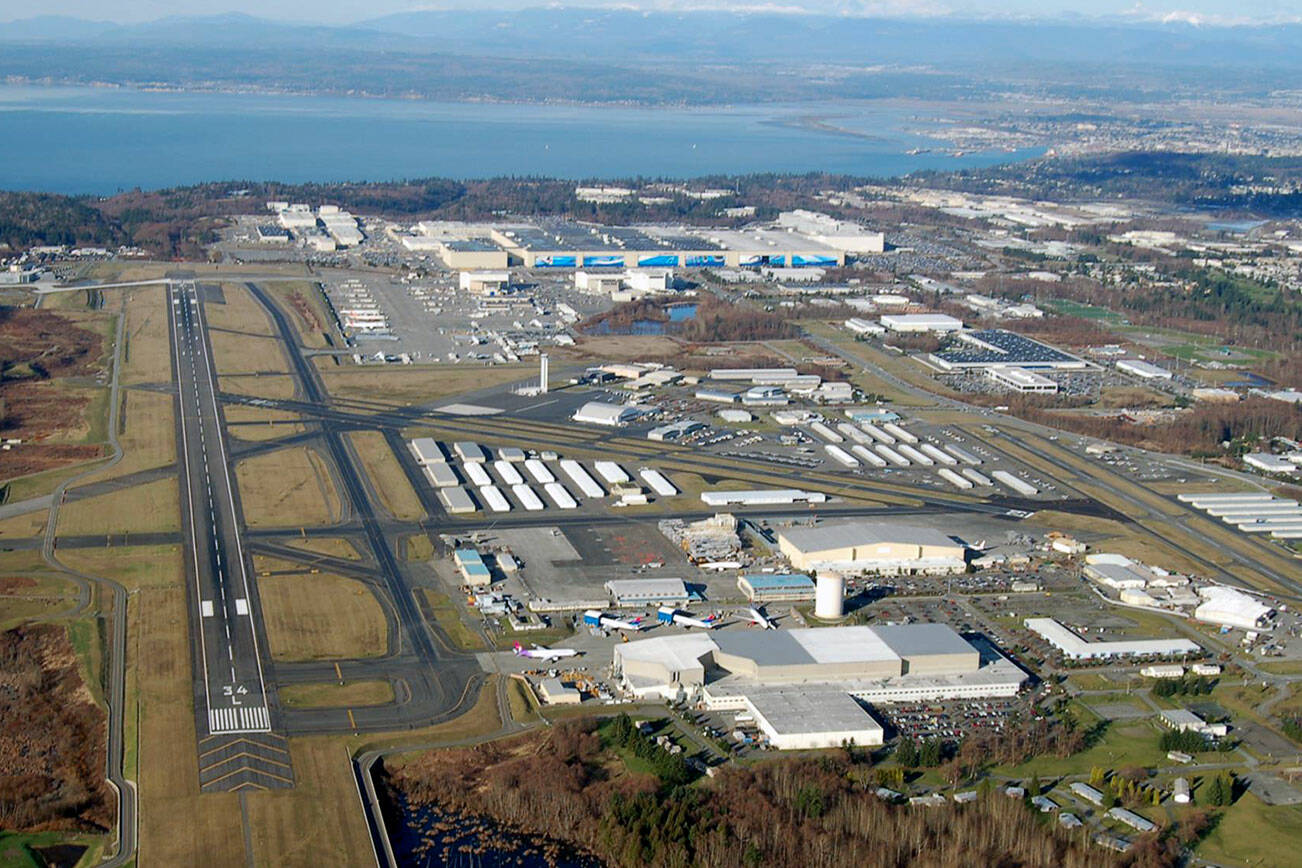 EVERETT — Snohomish County has released drawings of a larger passenger terminal at Paine Field, providing a window into how a long-term development playbook for Everett Airport is taking shape.

The rough designs are a sampling of the possibilities being considered as county officials assess how much space to reserve in the event the terminal’s private operator pursues expansion over the next few decades. The developments were designed under a “master plan” process formulated, according to the county, to assess the space that might be needed for different types of development at the airport by 2040.

For two years now, county and airport chiefs have been considering how to distribute Paine Field’s limited real estate among its many users, from general aviation pilots to aerospace builders.

“The intent of these drawings is simply to show what would be potential land areas that the county would consider setting aside for future development,” said Michael Tubridy, vice president of corporate planning for Landrum & Brown, the aviation consultant that the county has mandated. for the master plan. “We have to balance the whole system of parts at the airport and make sure they all fit together. It’s kind of like a big puzzle.”

The new drawings, along with other masterplan documents, add to a growing body of evidence that the Everett passenger terminal will need to be expanded over the next 20 years as demand for air travel in the area of Puget Sound exceeds the capacity of Seattle-Tacoma International Airport.

Despite the economic downturn caused by the pandemic, analysts predict that the terminal will see 4.3 million passengers per year by 2040.

Serving that many people would require nearly five times the square footage of the current terminal building, according to a draft analysis, prepared by the county’s aviation consultant as part of the masterplan process. The document, provided to the Daily Herald by the county upon request, was prepared as a chapter of the master plan known as “facilities requirements”.

Landrum & Brown estimates that the existing 44,000 square foot terminal can accommodate approximately 1.5 million passengers per year. When demand exceeds this threshold, which is expected to happen in the early 2030s, the terminal will need “incremental expansion”, the draft report says. Serving 4.3 million passengers per year would require four additional “contact” gates, connected to the terminal building, as well as eight additional “remote parking lots” for aircraft.

The company that built and operates the Paine Field terminal, privately held Propeller Airports, isn’t looking to expand anytime soon, CEO Brett Smith said. Its goal remains to restore the terminal to its pre-pandemic turmoil. In 2019, the terminal’s first year of operation, it offered 24 daily departures.

“We have no immediate plans to expand the facility and any expansion would be driven by passenger demand and subject to county approval,” Smith said in an email.

“Although Propeller is clearly interested in the master plan, we are only one of many stakeholders in the process,” he wrote, “and to date we have had a relatively limited role in providing our contribution to the county and its planners.”

A third diagram of the airport, also posted online by the county this week, offers insight into how airport property could be allocated to various future uses as part of the master-planning process.

The passenger doors at Paine Field in Everett could be expanded in two possible ways, including the addition of four positions for aircraft de-icing. (Paine Field / Snohomish County)

The consultant reports that another 400,000 square feet of general aviation space will be needed by 2040, including hangars and tie-downs. There are already a waiting list for the county’s general aviation hangars.

Some areas are also being considered for corporate hangars, air cargo facilities, and even “urban air mobility,” an emerging category of automated air transportation technology designed to move passengers around cities.

County leaders and airport staff are now refining options to choose a “preferred alternative” or development scenario, with the foresight and flexibility to meet future aviation demand.

On Wednesday, the county announced the start of a month-long public comment period, giving residents a chance to give feedback on the master plan process. The entire document will not be final until it is approved by the county council and then by the Federal Aviation Administration. That should happen next year, airport spokeswoman Kristin Banfield said.

Even once it is final, county officials say, it is a guiding document, not a binding document.

Everett Airport is on a state commission’s shortlist of airports that could grow to absorb unmet demand after Sea-Tac hit its limit.

The Commercial Aviation Coordination Commission refined that list earlier this year, noting that Paine Field is the only one of the six selected airports that has the “potential for additional commercial passenger service,” according to the commission. February report to Legislature.

The other five airports can still help meet general aviation and air cargo demand, but they have been excluded for passenger air service. Some are too far from population centers. Others lack the infrastructure needed for passenger flights, the commission determined.

Arlington Municipal Airport, on the commission’s initial shortlist, has a runway too short for large commercial aircraft and cannot expand due to surrounding development, according to a white paper presented to the committee last year.

But one of Paine Field’s two runways is 9,000 feet – long enough for “most passenger and cargo aircraft, including international flights,” the report said. With the large Boeing factory at the northern end, Paine has long been home to the world’s largest aircraft.

The commission, formed in 2019 to ensure another major airport is operational by 2040, includes transportation officials and government leaders from across the state. Snohomish County Airport Manager Arif Ghouse is a voting member.

Commissioners were first asked to identify a single location for a major new commercial aviation facility by the start of this year. But in 2021, lawmakers pushed back the final deadline to 2023 in response to delays caused by the pandemic.

The commission noted in its last report that “2050 is perhaps a more realistic target” for the opening of a new airport.

A consultant is studying potential sites for a new airport as part of a separate, FAA-scheduled study of the state’s aviation system, the commission said in the report.

Prior to the pandemic, demand for air travel in the Puget Sound area was expected to exceed available capacity at Sea-Tac and Paine Field in 2027.

But the global crisis has added at least a few years to that timeline, according to Paine Field forecast, which has been approved by the FAA. The forecast assumes that traffic at the Everett terminal will recover by 2025 and that Sea-Tac will “begin to experience unmet passenger demand in 2037”.

Any future expansion of the Paine Field terminal will also depend on the willingness of airlines to increase service at the terminal.

“Paine Field is an important airport and market for Alaska Airlines that we want to grow over time,” Alaska Airlines spokesman Ray Lane said in an email. “The work of the master plan is essential to this effort. We believe PAE,” which is Paine’s official three-letter designation, “is part of a long-term solution to address aviation capacity in the Puget Sound region.”

Space to expand the terminal

Propeller leases the land underlying the terminal to the county under a 30-year agreement. The agreement includes options for two 10-year extensions, provided the company makes monthly payments and meets other obligations under the agreement. It also guarantees Propeller the right to design, construct and operate all future terminal facilities.

New terminal layout drawings, published online this week, show examples of how the company’s lease boundaries could expand in the future to cover more land, some of which is paved but otherwise unpaved. expanded, if the terminal were to expand.

Between the expected growth in commercial airline services and general aviation flights, Paine Field will need further improvements, including a larger airport entrance, as well as more space for county law enforcement and airport maintenance and administration, according to the “Facilities Requirements” analysis project. .

The next phase of the master plan process will look at how to pay for the infrastructure improvements that are part of the development plan. Some projects may be eligible for FAA funding.

Visit www.painefieldmasterplan.com to learn more, submit comments and register for a webinar June 16 from 6 p.m. to 7 p.m.

The passenger doors at Paine Field in Everett could be expanded in two possible ways, including the addition of four positions for aircraft de-icing. (Paine Field / Snohomish County)