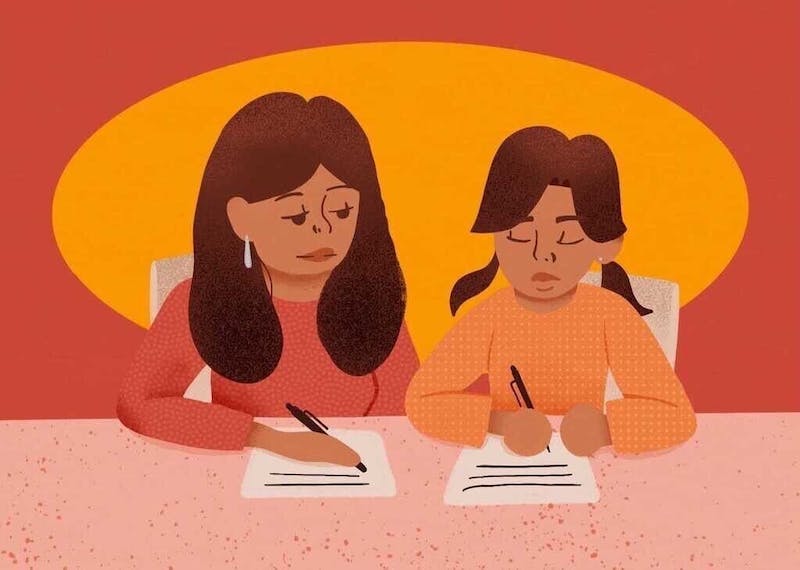 â€œMy mother carries her culture close to her heart because it is her identity. When it came time to train mine, I discovered Bangla on my own.

“We started by reciting the vowels, as she was taught – as she taught my mother, and as countless other children learned Bangla.” Illustration published on Thursday, March 4, 2021.

My parents met at my grandmother’s in Kolkata, West Bengal, India. Soon after, they married and started a family in America.

Naturally, to be a child of immigrants, I grew up speaking their mother tongue, Bangla. It’s the language that brought my family together and the one that never fails to bring me home.

My family has strong roots in India and great pride in its cultural history. The Bengalis, including my mother, take great pride in the cultural achievements of their state.

So it’s no surprise that my mother instilled in me the value of honoring my background.

She would boast of the influence of Nobel laureate poet Rabindranath Tagore, and she would sing Rabindra Sangeet as lullabies. She would call me saying “ekhane esho” rather than “come here” and speak to me in a mixture of Bengali and English depending on how she was feeling at the time.

My theory is that I learned Bangla by osmosis.

Back home in Arizona, my cultural background served as the theme of my life – something that inspired every decision and shaped who I would become. It’s always been a part of me, but at the same time, I was largely disconnected from it.

Summers in Calcutta have helped bridge the gap. I was exposed to my family history, listening to anecdotes and observing their interactions.

I was living in another language, not to mention another culture – bangla surrounded me, it was the key to opening up the way I saw the world.

All the while I saw signs, books and advertisements in the language script that I had recognized but that I could never crack. Filled with triangles, circles and loops, I was always in love with the idea of â€‹â€‹figuring out what exactly they meant.

When I was about 13, my grandmother, a former teacher from Bangla, came to visit us in the United States.

Maa had always insisted that my older sister and I learn to read and write in Bengali. She made an effort with my sister a few years ago, but it didn’t work out much. So she decided to try again with me.

She had brought with her many booklets and stories. Asking me to bring pen and paper to the table, my lessons were about to begin.

We started by reciting the vowels, as she was taught – as she taught my mother, and as countless other children were learning Bengali.

Afterwards, she made me write lines with the symbols. They were such ubiquitous characters in my childhood, but now I was tripping over my tongue trying to pronounce each perfectly and precisely. Soon after, she made me continue with the consonants, reciting them in patterns and rhythms.

I was addicted – I started writing little words and phrases, showing them to my family in the process. I had this new skill that I was so proud of.

A few years later, my grandmother came to visit me in the winter of 2019. It had been almost five years since I last saw her, and she had come to see my progress, which he said. Admittedly, was not much.

In those years between visits, I was just starting to become my own person, deciding who I was and what I wanted to represent. I didn’t struggle with my identity as an American born Indian, but in the predominantly white neighborhood I grew up in, I didn’t really draw attention to her.

With all the effort I have made to move away from a stereotype, in a way, I have accepted it as the truth. As an Indian engineering student I saw myself as one story and forgot that there was more to me and my background than that.

Shortly after returning home, the pandemic struck. The uncertainty of the future filled me with nervous energy and I needed to do something. Among other things, I decided to try to read in Bengali.

I had learned to write Bengali only after hearing it speak, but I channeled my energy into figuring out how to read Bengali – at the time my experience of reading Bengali was incredibly limited. It was a new frontier that I wanted to explore.

Learning to read myself with the knowledge I had acquired was an act of independence.

Bangla was no longer something I reserved for my family – it was something that was an integral part of who I was.

My mother carries her culture close to her heart because it is her identity. When it came time to train mine, I explored the Bangla on my own.

The language is at home. It is rootedness and sometimes it is the only form of stability in a world that cannot be controlled. My relationship with my family is rooted in this language, and it will continue to give me calm wherever I go.

Continue to support student journalism and donate to the state press today.