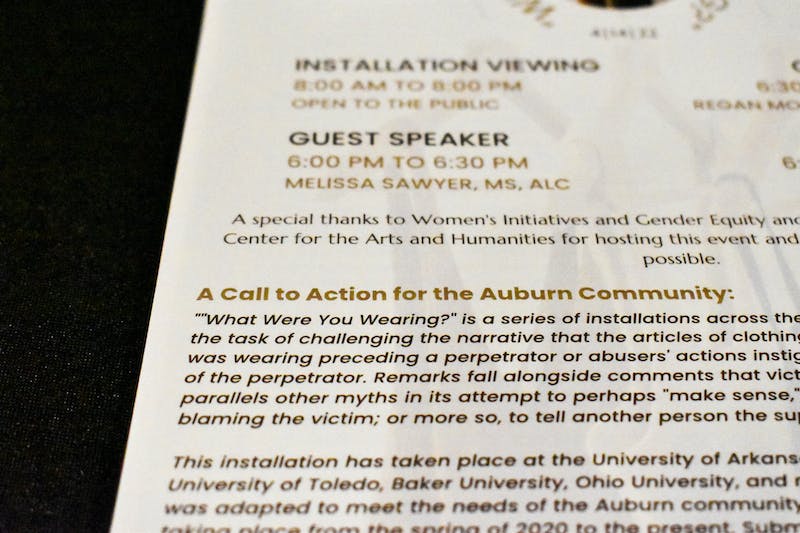 On April 14, 2022, the “What Were You Wearing” installation took place in Pebble Hill in honor of Sexual Assault Awareness Month. Microbiology Senior Regan Moss and Journalism Junior Ren Carroll organized the event and opened it to the public.

“The essence of the event is to address common myths in our culture and social narratives that victims/survivors were somehow responsible for their victimization because of the things they were wearing,” Carroll said. “It’s a range of clothes from people who were either models or the clothes they were wearing at the time of their assault. We’ll also have artwork such as paintings and poetry.”

Moss and Carroll aimed to not only raise awareness of the many different experiences of power-based violence, but also to create a safe and understanding community.

The exhibits included clothing, paintings and poems that were donated and created by survivors of sexual assault.

Moss and Carroll were inspired not only by their passions, but also by the on-campus environment that affected many Auburn students.

“We love people. And we know a lot of people who have been through things and haven’t had a platform to process that,” Carroll said. “It really lit a fire under our butts after the events that caused the protests from the Toomers. The environment on campus last year was really tough and people had to live with fight or flight.”

This event serves to encapsulate the survivor’s range of experiences and how each individual’s experience is unique to them. It also serves to not monopolize the conversation but to create space for everyone to tell their story in their own way.

“It’s not about trying to paint over it or wrap it up in an acceptable way,” Carroll said. “We like, in our society, to try to make everything really good and happy and pretty. It’s not supposed to be pretty. We want people to be uncomfortable. This is supposed to bring about change. It’s essentially why we do it – to implement change.”

The event started Thursday, April 14 at 8 a.m. The exhibits were open to the public until 8 p.m., and beginning at 6 p.m., Melissa Sawer, senior clinician for student counseling and psychology services at Auburn University, spoke as a guest speaker.

“One of the big things I’ll be talking about tonight is inviting attendees to keep the tension between seeing the pieces in the installations and maybe seeing their own experiences reflected back to them,” Sawyer said. “While also acknowledging that each piece represents a unique survivor with unique experiences, needs and desires. And I hope that I will speak about creating a more inclusive and trauma-informed movement to support survivors in our community.”

After Sawyer came to speak, there was a candlelight vigil to show support and solidarity among the guests.

The event ended with a meditation allowing guests to process what they experienced during the event and the emotions that accompanied it. After the meditation, Carroll and Moss came to make some closing statements to send guests off with a new perspective.

“When you are able to understand some pain and you have to recognize and see other people who have been through these things, you understand how much their suffering or how much pain they have and it hits differently,” Carroll said. . “Ultimately, the end goal of this event was to help people. If it makes a person feel understood or feels like they have a platform, if it makes a person to gain a perspective or insight they didn’t have before, if it inspires even one person to change, it would be worth the effort.”

2022-04-15
Previous Post: How machine learning is redefining computing in 2022
Next Post: The Mayor tours the Keepmoat Homes Leicester Waterside development